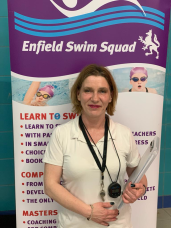 More than 160 ESS Athletes took part in the ESS Regional Qualifier held at Southbury Road on 7th and 8th March. Many athletes rose to the occasion and shone with some strong performances, outswimming previous PBs and obtaining regional times.

A huge thank you must go to our fantastic team of helpers and officials. Special congratulations to Beata, who qualified as a British Swimming Official Judge 1 at the competition.

Thank you also to coaches, athletes and helpers from visiting clubs Broomfield Park and Staines.

Ashley, Sam and Ellisia kicked off the series with stellar performances in the British Summer Championships at Tollcross in Glasgow, where Sam and Ashley both made finals securing a top ten finish amongst the fastest age group athletes Great Britain has to offer on the national stage.  Meanwhile Declan successfully represented ESS at Irish National Champs in Dublin.

Ashley swam to Gold on the first day of the English Summer Meet at Ponds Forge in Sheffield in the 100 Breaststroke with an impressive new PB of 1:12.28. Amazing job also from Richard on the same night: Richard competed in the 100 Breast to finish 7th in the final, where he broke his PB set in his heat swim earlier in the day (final time: 1:07.49).

Ashley was up again on the final day of English Nationals in the pool with an amazing season best time of 28.88 to finish in the top 5 in the 50 fly.

Finally, Jamie qualified for and took part in the Swim England Open Water Champs, completing his 5k at Thrybergh Country Park in Rotherham in an impressive 10-minute PB time (64 minutes).